Interview with Devi Mohan by Branislava Micić from the “She” Magazine (Magazin ONA), Belgrade, Serbia, December 2018

Devi (Biljana) Mohan, the first Serbian woman who spoke at the Parliament of World’s Religions

“For the hungry, food is God“. Mohanji

“When you blame someone else and do not assume responsibility, you lose your power.” Devi Mohan

Devi (Biljana) Mohan is the President of a globally active charity organization ACT Foundation founded by her husband Mohanji, a spiritual Master from India. She is an international Certified Yoga Instructor and Director of the Himalayan School of Traditional Yoga. Devi is also a dedicated Mom of their daughter Mila. At the moment she lives in Slovenia.

The main cause of Devi’s interview by the Magazine She (Magazin Ona) was her speech at the Parliament of World’s Religions which took place in Toronto, Canada recently. This was a truly historic moment, since Biljana is the first Serbian national and the first woman from Former Yugoslavia who spoke at this world’s biggest interreligious and interfaith event, slowly growing into a full fledged international interfaith movement.

Can you please explain what is Parliament and what are its goals?

Devi Mohan: The Parliament of World’s Religions (PoWR) is the oldest, largest, most diverse and inclusive global interfaith event which included the biggest number of world’s religions and spiritual communities. Since 1893, when the first Parliament was held in Chicago, till date, this incredible event that celebrates the beauty and richness of our diversity, was held seven times (1893, 1993, 1999, 2004, 2009, 2015 i 2018), always at a different location. As the representative of Mohanji Foundation and experiential spirituality that we stand for, I was truly honored to be part of the event which gave voice to some of the greatest spiritual leaders in history of humankind: Swami Vivekanada, Nelson Mandela, Dalai Lama Tenzin Gyatso, Sri Mata Amritanandamayi Devi, Jane Goodall, Sri Chinmoy, Sri Sri Ravi Shankar and many more.

What made this 2018 Parliament different?

This time the city of Toronto hosted the Parliament, the city that is number one in the world in terms of its diversity. And the 2018 Parliament was the biggest so far. From 1 – 8 November 2018, around 500 programs and events have been conducted. The Metro Convention Center in Toronto felt like a city, it was indescribably huge. There were around 10.000 visitors from 80 or so countries and more than 200 religious and spiritual communities. Even though I had studied International Affairs and after that did my Masters in Peace Studies, I simply never even heard of some of them (e.g. Cao Dai from Vietnam) and overall really expanded my horizons and knowledge base.

What left the deepest impression on you at the Parliament?

It was the incredibly powerful energy that was felt throughout the Parliament, starting with the Opening Ceremony when one of the representatives of the First Nation (the natives of Canada) spoke. Throughout the history, the Native tribes in Canada did not fare any better than the Native Americans, but it was wonderful to see that now they finally started to enjoy the attention, recognition and respect that they have always deserved.

All in all, this event was not about tolerance, nor was it an attempt to place all the eggs into one basket. On the contrary, PoWR was about true respect, recognition and celebration of our diversity. When we see a field full of beautiful flowers of all colors and shapes, we feel happy and remain in awe of the wondrous beauty of nature. Who would want to see the same flower everywhere? How boring would that be!

I admit that by June this year I did not even know that the Parliament of World’s religions continued to be held after the famous speech of Swami Vivekananda, in 1893. During my postgraduate studies, I read about this speech in my favorite book „Autobiography of a Yogi“ . The author of the book, Paramahamsa Yogananda, said that Swami Vivekananda literally downloaded English from the higher consciousness, while traveling from India to America. I was fascinated by that fact. Is it possible to clear up the antennas of our consciousness that much that we can bring down from the celestial library any kind of knowledge that we need? With this book, a true transformation took place in me and my firm decision to turn my inner compass towards opening in higher Consciousness, instead of career and accumulation of material goods, was made.

And what happened after this transformation?

After my studies, the first job opportunity appeared in Dubai, in 2005. I decided to move there mainly because it is close to India. Two years later, I met Mohanji and from that moment a whole new life had begun, a life that continues to write novels. In my natal chart, Jupiter is in the house of marriage and that is why it was simply given to me to have a spiritual teacher (Guru) for a husband. With Mohanji I learned what it means to live in the present moment and let the path be formed in front of our feet as we walk. I have no monthly salary, savings, nor do I have anything that is guaranteed in my life, which is exactly what the mind would like. I let myself go completely and while being in the present I do my best to live the spiritual teachings and the truth that we teach. In short, it is an experiential spirituality with an emphasis on selflessness, spiritual practice (meditation, yoga), charity work and assuming responsibility for everything that happens to us, while nourishing gratitude through all experiences, pleasant and unpleasant.

Images from the 2018 Parliament of World’s Religions

I learned  about the Parliament of World’s Religions in June 2018, during the peace event called Peace Pledge, in Assisi, Italy. It was a gathering of about twenty representatives of various spiritual paths and religions. Before the event in Assisi, I was a part of the first leg of Peace Pledge group that visited Greenland, from where we brought bottled water from the magnificent glaciers which are unfortunately melting at an incredible speed. At the same time, spiritual representatives from India brought with them the water from the holy river Ganges. During the peace prayer in Assisi we had a sacred ceremony during which these two waters were mixed. The energy during that event was superb. It was at this event that I met Audrey Kitagawa, a Chair elect of the 2018 Parliament of World’s Religions, who was the instrument of my participation at this magnificent event in Toronto representing Mohanji and Mohanji Foundation. Even though I didn’t know much about it, intuitively I felt that this event is important and that, in some way, it would change my life.

What was the goal of your speech?

Remembering Swami Vivekananda and his speech, I gave myself a challenge to let all that I have to say simply flow through me. I didn’t prepare any notes. That is exactly why this was a really special, divinely beautiful and unforgettable experience. The goal of my speech was to express my own truth, based on my personal life experiences and insights. I wanted to emphasize that the charity work (love expressed through action, assuming responsibility to do what we can at any given moment in order to help someone who is helpless or weak), nonviolence towards other beings and Mother Earth, spirituality in general and pure unconditional love, are the key elements in achieving and preserving peace. I would like to share with you a quote from my speech (you can find the edited version of of key parts of the speech on Mohanji You Tube Channel): “I realized that if we want peace as a supreme energy to descend to earth, it must happen through our spine. The spine is the path to paradise. And that was the moment when I turned to India and the ancient teachings, because they have known it all along. They have known that the vertical dimension of human existence is the solution for peace.“

Was this the first time that women spoke at the Parliament?

No, but they were certainly represented much more then before. Several panels dedicated to challenges unique to women and women’s rights were held. In 2018, for the first time in the history of the Parliament of World’s Religions the Chairperson was a woman, and none other then the wonderful  Audrey Kitagawa, whom I met in Assisi. Originally from Japan,  Audrey may not be tall physically,  but in every other aspect she is a true giant. Her speech during the Closing Ceremony of the 2018 Parliament was especially beautiful. With an incredible ease and only a few notes in front of her, beautiful words and deep insights kept flowing through her, like pearls forming a lovely necklace. It was a very touching speech in which she mentioned her mother who was very eager to get educated, but never had the opportunity because she had to raise her daughters. She said: “Although she is not alive anymore, I know that she is with me now  in spirit and that she has achieved her dreams through my success.“ It is a story of many mothers including mine too, although I am fortunate that my Mom is still alive and supports me in everything I do, and my Dad as well.

Whom else among the speakers would you like to point out?

I would like to mention the former Prime Minister of Canada, Kim Kempbell, who made us laugh with her direct and bold statements such as: „Nuclear industry is a testosterone-fueled industry filled with machismo.“ Vandana Shiva from India also spoke brilliantly, focusing on the fight to preserve the seeds of our planet from the frightening hold of GMO corporations. There was one brilliant statement of hers that stayed with me: “All of us were created by the same God. What does that mean? Well, that we are related, that we are brothers and sisters!“ 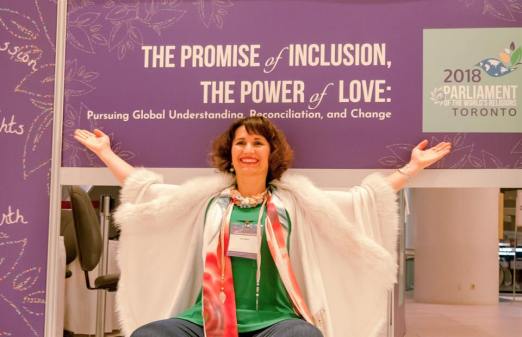 Devi Mohan is a certified Yoga Instructor (E-RYT 200), Director and senior teacher of Himalayan School of Traditional Yoga (HSTY) and the Global President of an internationally active charity ACT Foundation. Devi has been an integral member of Mohanji Foundation, the international spiritual mission of her husband and spiritual guide Mohanji, since its formation in 2007. She represents the Foundation as its Global Ambassador at various international events. Aside from conducting regular Yoga sessions in Slovenia, where she resides, Devi conducts Yoga workshops and seminars internationally, and participates in Mohanji Retreats and spiritual pilgrimages (Peru, Tibet, India, Bosnia, etc.) organized by Mohanji Foundation. Moreover, she is an ardent supporter of international peace initiatives (such as Peace Pledge Project and Parliament of World’s Religions) and women’s empowerment conferences. Be it by performing sacred Energy Transfers during Mohanji’s meditations, teaching Yoga through HSTY, selflessly service and adding value to the society through ACT Foundation, conducting profound methods of inner cleansing and balancing like Conscious Dancing and Awakening Yoga Nidra, or by being an instrument of healing through the M Method, Devi’s highest aim is to move beyond all identities as a pure instrument of the Divine, eventually merging with the Supreme. For more information, please visit: http://www.devimohan.com/about/ View all posts by devimohanblog